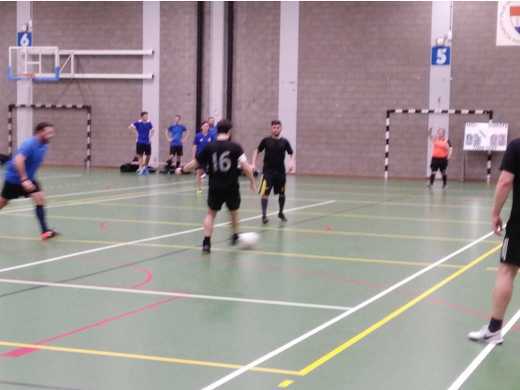 Division 2 takes a rest. Divisions 3 and 4 on full swing.

In Division 4, FC Ambiance Team got their first ever HEBE League win against RMP FC 4-3. Jawad Saddiki’s hat-trick for Ambiance cancelled two goals by Maria Paz de la Cuesta de los Mozos on the RMP side. Expected Toulouse, another new team, got their second win against La Vie Est Belge, thanks to 4 goals by Justine Libioulle who joins Hibo Mohammed at the top of the goalscorers’ table, and 2 goals by their power striker Andreas Gahleitner. Expected sit in a respectable 5th place after 4 games. After conceding a defeat last week, Brussels Sprouts recovered well with a convincing victory over La Famiglia 8-1, with 4 goals from Alexia Bourguignon. The Sprouts showed it was peak season for sprouts as they pick up 2nd place on goal difference ahead of Turx & Plux who beat ICF 4-1, with Gokhan Joker scoring all 4. After 2 draws, The Eagles went back to winning ways, spreading their predatory wings and sweeping up an 8-2 win over Binboga. At 2-2 at half-time, things looked undecided but two hat-tricks by Pit Klein and Andrea Capodicasa got The Eagles into 4th place - and still undefeated.

In Division 3, Serdica are still looking for their first win of the season, as they conceded a narrow defeat 3-1 against Sofobeast United, with 2 goals by Marjan Verhaegen. Black Turtles, after having secured their first win last week, had high hopes of reiterating their performance against Eurotrash FC, with 2 goals by Julie Changivy and 2 by their power striker Fabian Manning, who leads the goalscorers’ table. But Eurotrash FC withstood the attack and came out on top 6-5, a narrow victory that places them in 6th place, just in front of Los Patos Hermanos who drew 2-2 with Soloni FC. At the top of the table, things have moved with Zlote Ptaki and Orcs in Black dropping points. Zlote Ptaki lost 3-2 to B United, in a tight game that was decided in the second half. Lukas Kienzle scored his first two goals of the season and they came at the right time, allowing B United to celebrate their first victory of the season, against one of the top teams of the division. As for Orcs in Black, they drew 5-5 against Cercle Curie KSV who fought tooth and nail after their encouraging win against B United. These results went in favour of HueHue FC who came back from 2-0 down at half-time with a heroic second half and victory 4-3 over A.C. Oronzo Canà. 2 more goals from Nathalie Meyer showed how decisive she is becoming to her team as they clinch their 4th consecutive win of the season, and 1st place.

While Division 2 took a rest, there were only 2 games in Division 1. AS Soreta blasted FC Fig Puckers 10-5. The hat-trick by Tamas Laucsek and 2 goals by Houane Rolande Tokpoledo did not suffice to contain the offensive armada of AS Soreta: 4 goals by Momo Zubiria, who leads the goal scorers’ table, and a hat-trick by Alexander Nitz. In the other game, Bananapbcoe secured their 3rd place with a 3-1 win over Placido’s. As several teams still have up to 2 games in hand, Division 1 is still very undecided.