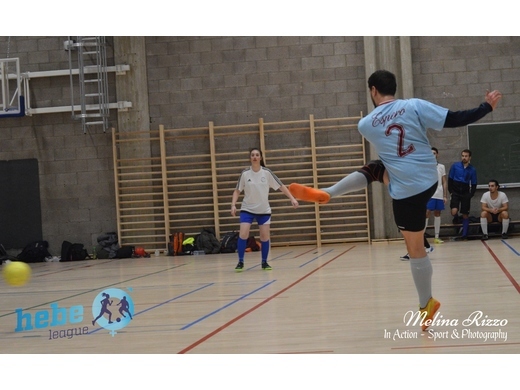 If football is the ballet of the masses, here is where you catch up on its latest choreography.

All divisions were in full swing on Sunday, with games spanning across both pitches at the VUB and at ULB Erasme. An action-packed day of HEBE League football.

In Division 1, the two undefeated powerhouses Cyprus FC and Hangovers set themselves up for an exciting clash this upcoming Sunday. Cyprus FC secured a 5th consecutive win 9-3 over Knackers, thanks to a perfect first-half which saw them take the lead 7-0. Dimitrios Philippas scored a quadruple, and Evangeli Bangura and Stalo Papalouca both scored a double. In the second half, Knackers came with better intentions and Juliana Costa Gomez scored her first double of the season. Likewise, in the game between Hangovers and Spider FC, the Hangovers were merciless in the first half, taking a 7-0 lead. But despite conceding a goal in the second half, they were just as merciless, closing the final score at 14-1. Anna Jowle, with a sextuple, made a big impression on the game, as did Horacio Henriquez with a hat-trick, and Petra Söderqvist and Abdel Boujnani with a double each. Completing the podium, Spartak Zizou claimed a very tight win 3-2 over Los Chorizos Bionicos, who have come close every time, but have still not managed to get a win. This time, they can blame Selim El Magroud who scored the hat-trick for Spartak. In the middle of the table, Bananapbcoe benefited from the forfeit of the Treehuggers to claim a 5-0 win and climb up the rankings into 6th place, while the Treehuggers hover dangerously above the relegation line. A relegation line that El Santo Subito leaves behind, thanks to a very solid performance against Survival of the Fattest. Down 2-0 at half-time, having conceded a double by Survival’s Florina Tobon Escobar, they completely reversed the course of the game in the second half to claim a 6-3 win. The Sheikhs, who were first on the 9th of February, now find themselves just above the relegation line, suffering their third consecutive defeat against A.S. Soreta. Both teams had lost their two previous games, and both teams finished on the podium last season, so it was naturally a game of big significance. But A.S. Soreta, guided by Momo Zubiria who scored a quadruple, left no chance to The Sheikhs, claiming the first half 7-2 and pumping their goal difference to win 11-3.

In Division 2, The Running Dead were prevented from taking straight wins by a heroic Orcs in Black. The Champions of Division 3 held steadfast onto a 2-2 draw they acquired in the first half, thanks to a double by their Vera V. As The Running Dead drop their first points and their first place in the rankings, the Einsteinians take the lead with another convincing display of offensive firepower against Atletico Belgique. Up 3-0 at half-time, they ploughed on to secure a 9-3 victory with 4 doubles by François Ducrotte, Marta Gutiérrez Benet, Yon Santos and Félix Poirier. But the big surprise of the day came from the shock win 2-1 of Sofobeast United over Red Star Brussels. At the bottom of the table before the game, the Sofobeast lift out of the relegation zone thanks to the beastly double by Siemen Buttiëns. A defeat that was not enough to topple the Red Star from the podium, but they are now on equal points with a serious contender: the Legislators. They pick up a second consecutive win 6-4 over B United, with yet another masterclass performance by the best male goal scorer of the division Andre de Giorgi, who scored a quadruple. Andromachi Bregova did score a double for B United, but it was not enough to get around the rule of law. After two consecutive defeats, FC Fig Puckers were also on the look-out for points. In a close encounter, they narrowly beat FitNow! 2-1 with a double by their best goal scorer Benedeguz Nagy. They stand in 5th place and at 1 point from the podium. Finally, at the bottom of the table, Serdica and Zlote Ptaki were both looking for their first win of the season. Gyokhan Hyusein did keep Serdica’s hopes high with his hat-trick, but Zlote Ptaki finally managed to get the gold, winning the game 4-3 with a double by Constantin Gissler. They jump from 9th place to 6th place, only 2 points away from the podium.

In Division 3, Expected Toulouse crushed PIOLALIBRI 15-0 and comforted their first place. They combined 3 quadruples by Andreas Gahleitner, Mattia Bellotti and Justine Libioulle, and a double by Jesper Veber, to asphyxiate their opponent. Expected Toulouse dominate the rankings in this first half part of the season, with best attack, best defense, best male and equal best female goal scorers. For PIOLALIBRI, times are tough in the relegation zone, following a poor season in Division 2. But their experience in the HEBE League should not be underestimated! In another duel of the extremes, Arena BXL blasted HueHue FC 11-2, with a quadruple by Aurélie Balsamo and three doubles by Ana Ribeiro, Steve Desiocho and Pietro Lama. Arena BXL, with a 4th straight win, are the only team to keep up with the pace set by Expected Toulouse, while HueHue are left looking for their first points. Completing the podium, The Eagles are also flying high with a 4-0 win over Cercle Curie KSV, as Pit Klein scored a hat-trick. After an upset last week, Sublime Porte went back to winning ways against A.C. Oronzo Canà. But it was not without a fright as Oronzo was up 2-1 at half-time, and Gabriele Alaimo was on form, scoring a quadruple. But the second half went in favour of the Sublime Porte, with Ismail Gezginer leading the way with his quadruple, and two further doubles by Fatih Ozcelik and Kaan Altintas. At the bottom of the table, Los Patos Hermanos finally got their first win at the expense of Casa del Mal. Tied 1-1 at half-time, they claimed a tight 3-2 win that lifts them out of the relegation zone. The Champions of Division 4, Turx & Plux, recovered from two defeats with a prestigious 5-3 win over the Hairy Canaries. Taking a 1-0 lead at half-time, the game opened up in second half but Turx & Plux stayed on top with two doubles by Emre Tas and Vicky Kanka, against a double by the Canaries’ Roller Montes Paucar.

In Division 4, Soloni FC were pushed to their limits by RMP FC, who came back from being down 5-2 at half-time to finally lose 8-7, having won the second half. With Nina Olesen scoring a quadruple and Enda McNamara scoring a double, RMP FC displayed spirit and strength – but it was not to count on Soloni’s offensive firepower with two hat-tricks by Kevin Pento and Massimiliano Paraponiaris as well as a double by Astrid Conem. This maintains Soloni in first place, on equal points with Brussels Sprouts who benefited from the forfeit of Binboga. With a solid defense, the best defence across all divisions with only 2 goals conceded, Brussels Sprouts have high hopes to be part of the promotion wagon this season. In third place, La Famiglia were keen to recover from their upset in the last game and they did so brilliantly, overcoming FC Belgium BXL 3-1. FC Belgium BXL are still looking for their first points this season. In 4th place, the Schaerbeek Bombers are picking up momentum, claiming a second consecutive win over Eurotrash FC. It was a victory they acquired patiently, coming from being down 1-0 at half-time, to overturn the trash in the second half. Eurotrash, who have a game in hand however, are still only 3 points away from the podium. Also picking up momentum is Futsal Croatia BXL, who claimed a second consecutive win over ICF, 3-0. The double by Emmanuel Nakic and their goalkeeper who steered the Croats to safety. Finally, in the middle of the table, the Black Turtles and La Vie Est Belge were stalemate at 2-2, tying in both halves.

See the photo album on our HEBE Sports Facebook Page!