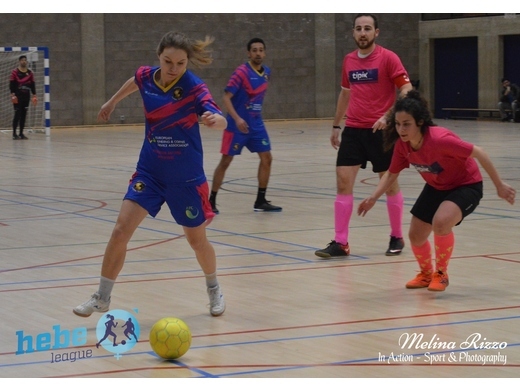 Immunity systems were boosted with football detox this Sunday. And El Santo Subito appeared in a fiftieth shade of pink.

As Division 2 took a breather, Divisions 1, 4 and some of Division 3 were out to play.

In Division 3, only two games took place. Against Casa del Mal, Cercle Curie KSV were looking for their first win of the season. After a narrow defeat and a draw, this time they seized their chance over Casa del Mal who are still looking to recover from their relegation last season. The great architect of their 8-3 win was Bea Pozo who scored a quadruple, taking her right to the top of the goal scorer rankings, while her teammate, Jaime Bosque, scored a hat-trick. Michael A did try and keep the house from burning with a double, but Cercle Curie were on a mission to save the world. 3 points that bring them on equal points with their opponent, but with a better goal difference. Next up was Arena BXL against Los Patos Hermanos, with Arena aiming at immediate promotion and Los Patos looking to get their first win. But Arena BXL quickly took the lead 3-0 at half-time, with a hat-trick by Jordan Waegemans. Despite a slight scare in the second half, with a double by Patos’ Alisha Sesum (equal best female goal scorer with Bea Pozo), Arena BXL kept the Patos with their head below water, sealing their final victory 4-2. Arena joins Expected Toulouse at the top of the table with equal points, while Los Patos remain in the relegation zone.

In Division 4, 2 of the new teams got their first wins! First, the Schaerbeek Bombers showed some fire power, blasting RMP FC 8-2. 3 doubles by Benedetto Martini, Maria Ortega and Enrico Pulverini crushed the double by Nina Olesen for RMP. A victory that places the Bombers one point ahead of their opponents, in 6th place. Second, in the first game between newbies, Futsal Croatia BXL delivered the goods against the Benchwarmers. A 4-1 win, with 4 different goal scorers, showing strong signs of unity and team spirit. For the Benchwarmers, it’s a third defeat in as many games but they have the weekend off this Sunday to reflect on their tactics and come back stronger on the 15th of March against ICF. ICF, who forfeited against Brussels Sprouts, giving up 3 points to the Sprouts who weren’t asking for any more to maintain the pressure at the top of the table. A pressure that Soloni FC looks able to take on, although La Vie Est Belge gave them a run for their money. Winning 10-7, Soloni FC displayed once again offensive dynamite, with a hat-trick by Massimiliano Paraponiaris, best male goal scorer of the division, and two doubles by Astrid Conem and Kevin Pento. Susana Magano and M Corcodel did keep La Vie Est Belge on the bright side of the match with a double each, but it was not enough to contain Soloni. With their 3rd consecutive win and best attack, Soloni FC holds onto its first place in front of Brussels Sprouts. With a game in hand, Eurotrash FC complete the podium with a clean sheet and 3-0 win over La Famiglia, finding their way to the back of the net against the only team in the whole league not to have not conceded a single goal until then. After their upset last week against ICF, the Black Turtles were keen to show they were not off to a slow start. Despite two doubles by Samet Guler and Sanem Oguz, Binboga did not withstand the Turtles who had their winning mode, claiming a 10-5 victory and 4th place in the rankings.

In Division 1, the classic encounter between the Hangovers and El Santo Subito held all its promises. And not only because El Santo Subito opted for a fiftieth shade of pink. Tied 1-1 at half-time, the game finally closed at 2-2. The Hangovers and their HIP who self-paparazzied themselves, remain undefeated but they drop their first points of the season, while El Santo Subito confirms its better form after suffering two inaugural defeats. With Hangovers dropping points, Cyprus FC did not miss their opportunity to take the lead in their game against Spider FC. Although Spider FC were still holding on in the first half, with Amina Tailouti scoring a double, Cyprus FC were relentless, especially in the second half where they scored 7 goals alone. Evangeli Bangura was the great artisan of the Cyprus FC victory, scoring a quintuple that places him at the top of the male goal scorer rakings, but Stalo Papalouca, Guillaume Noel and Romain Vanhove also each participated with a double. Best goal difference, equal best defense, second best attack, best male goal scorer, a 4th consecutive win and 1st place in 1st division: it’s a stellar start to the season for Cyprus FC. Fun fact: Cyprus FC’s last defeat in the HEBE League dates back to the 19th of May, when they lost 7-3 against… Spider FC in Division 3. Times change and teams evolve, and that’s what makes the magic of the HEBE League! Thanks to a forfeit from The Sheikhs, Survival of the Fattest took the 3 points to consolidate their 3rd place, one point behind the Hangovers. All the other games were exceptionally tight. Another classic encounter between Treehuggers and A.S. Soreta showed how difficult it is to claim points in the HEBE League, with Miguel Girao’s single goal of the game in the first half giving the win for the Treehuggers. 3 points that bring the Treehuggers back to the middle of the table after having lost 2 consecutive games, while Soreta suffer their second consecutive defeat. Not often that games finish with 1 goal or less, but oddly, the Treehuggers beat A.S. Soreta with the same tight scoreline last season as well. At the bottom of the table, Los Chorizos Bionicos claimed their first point against Knackers, but they gave away a 4-2 lead at half-time with a double by Ana Egea. Knackers came back stronger in the second half, with Nathaniel Demars scoring a hat-trick to bring his team back to 4-4. In the middle of the table, Bananapbcoe were up against Spartak Zizou, and it was a battle of the Raphael(le)s. Down 3-1 at half-time, with Raphael Mahfoudh scoring a double for Bananapbcoe, Raphaelle Moeremans scored the equalising double for Spartak Zizou to bring her team back to 4-4 and salvage a point.

The bitter sweet magic of the HEBE League.

The photo album is available on the HEBE Sports Facebook Page.