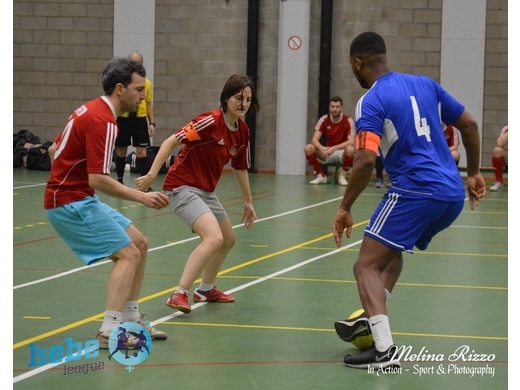 ​What storms hit Brussels over the weekend? You thought it was Ellen, but the answer is in this week’s report from the HEBE League.

The first storm came from the South West in Division 3. Expected Toulouse were facing their ex-rivals from Division 4 Sublime Porte, in a top of the table clash between two teams who had won their first two games. Last season, both teams had tied 3-3, but this time around, Expected Toulouse closed the door on Sublime Porte. Already leading 4-0 at half-time, they continued to pound at the goal with Andreas Gahleitner scoring a quadruple, Fabio Magnoli and Justine Libioulle both scoring a double, to close the game at 9-1. A score that sends them to the top of the rankings with a comfortable goal difference. At the bottom of the table, HueHue FC was facing A.C. Oronzo Canà, two teams hoping to score their first points this season. A.C. Oronzo Canà got off to a better start, leading 2-0 at half-time. And despite Nathalie Meyer netting a fantastic penalty for HueHue, the winds turned in favour of A.C. Oronzo Canà, who held onto their lead thanks to a double by Gabriele Alaimo, to claim a 4-3 win. After a small upset against Sublime Porte, the Hairy Canaries recovered well against PIOLALIBRI, who are having a difficult start to the season. Thanks to two doubles by Adeline Palisse and Inigo Yenes, the Hairy Canaries sailed to victory 5-0, their hairy wings flapping happily in the wind. In the middle of the table, The Eagles were up against Turx & Plux, two teams on equal points with one win and one loss. Up 3-2 at half-time, Turx & Plux did not resist the headwind as the Eagles preyed from above, scoring 3 goals in the second half. Notably thanks to a double by Charlotte van Brabandt and a goal by Nick Haaker captured on video, The Eagles are provisionally 4th.

In Division 2, The Running Dead are storming ahead, with a 3rd consecutive win and all-out collective performance against Sofobeast United. They won 5-1, with 4 different goal scorers, Jean-Jacques Pierard claiming a double. Up 3-1 at half-time, they outplayed the Beast and held steadfast to victory and to first place. Right on their heels are the Einsteinians, who secured a just-as decisive and just-as collective 6-1 win over Orcs in Black, with 4 different goal scorers and Félix Poirier scoring a double. But it’s Florian Bergmuller’s opening goal that was captured by the Hangovers Instagram Paparazzi. They remain 2nd on goal difference, having conceded 2 more goals than The Running Dead. In third place, Red Star Brussels faced off FC Fig Puckers. It was a disputed game, with the Fig Puckers up 3-2 at half-time thanks to a double by Benedeguz Nagy, but Red Star had the necessary resources in the second half to win 6-3. Two doubles by Eliana Gomez and Ellie Walton (one of which was again, captured by the Hangovers Instagram Paparazzi – hereafter referred to as HIP) certainly helped to shape the final score. In 4th place, B United were up against Zlote Ptaki who were seeking to claim their first victory this season. They showed their teeth in the first half, leading 3-2, but just like in their previous games this season, were unable to hold onto the score and left B United to come back and claim an equaliser at 5-5. Before getting sent off, Andrzej Pyrka scored a hat-trick that had Zlote Ptaki well in the game, but B United came back with two doubles by their mega-strikers Lukas Kienzle and Niklas Juhl. But there is another striker in the league who spreads fear into any defence, and that’s Andre de Giorgi for the Legislators. Once again, he was decisive, scoring a hat-trick against FitNow! to help his team into a 6-5 win. Supported also by a double from Angela Tessarolo, the Legislators overcame a double by Karl Thies. A narrow but important victory that places them in a group of 4 teams with Orcs in Black, B United and Atletico Belgique in the middle of the table, each with 4 points. A position earned by Atletico Belgique at the expense of a very tough battle against Serdica. After having lost their first two games by the narrowest of margins, Serdica were highly motivated to set things straight, and they showed it in the first half, claiming a 3-1 lead, with a double by Gyokhan Hyusein. But Atletico Belgique showed some Simeone-style grinta to come back in the second half and clinch the equaliser at 4-4, with Raul Paramas scoring a double. A tie that leaves Serdica in the relegation zone – but not pointless.

In Division 1, Cyprus FC continued their impressive undefeated streak, with a 4-2 win over Los Chorizos Bionicos. Again captured by the HIP, Los Chorizos Bionicos pressed hard and strong, but the smell of sausage did not provoke the Cypriots who kept their calm and composure, and Dimitrios Philippas did the rest, bagging a double. Survival of the Fattest showed once again that they were a force to be reckoned with in 1st division, as they blasted past the Treehuggers with a 9-2 win. After a close first half, and a ouble by Jodie Verhoeven, the Treehuggers were finally axed in the second half, conceding 6 goals, one of which was captured by the HIP. Sophie de Laet scored a quadruple and Vlad Hosu a double, leading the Fattest into 3rd place. After two initial defeats, the Knackers made sure they were properly warmed up before entering the pitch to face off Bananapbcoe. Thanks to the HIP, we can witness that winning games is also the accomplishment of the goalkeepers, although this does not always show in statistics. But certainly, the Knackers goalkeeper made a very strong impression. He kept a clean sheet in the first half, with his team leading 2-0, and only conceded one in the second half for a final score 3-1. A first win that does not quite lift the Knackers out of the relegation zone, but does put them on equal points with a group of 4 teams including Treehuggers, Bananapbcoe and El Santo Subito. As for Spartak Zizou, they won by forfeit against A.S. Soreta. 3 welcome points that bring them into 5th place, on equal points with their opponents.

So, who will take the HEBE League by storm next week? There are certainly some interesting clashes ahead: Survival of the Fattest or The Sheihks, in Division 1. Soloni FC or La Vie Est Belge, in Division 4. Arena BXL or Los Patos Hermanos, in Division 3. The answer in next week's episode!

See our HEBE Sports Facebook Page for the Photo highlights of Match Day 4!