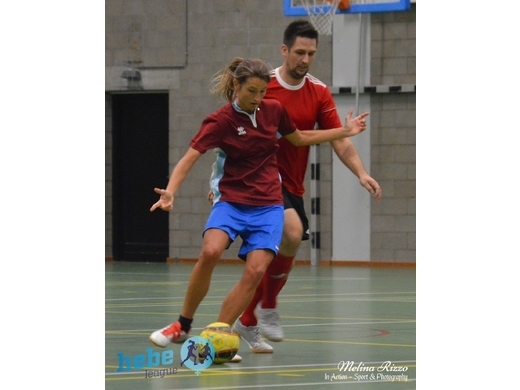 After 28 weeks of HEBE League hiatus, it was finally time to get back to the pitches last Sunday.

It’s good to be back! After 28 weeks of HEBE League hiatus, it was finally time to get back to the pitches last Sunday.

So let’s refresh our memory before Gameweek 2 this Sunday and take a closer look at what happened:

In Division 1, the heavyweights were back in full swing, with Cyprus FC clinching a 5-2 win over Bananapbcoe. Raphael Mahfoudh, the Benjamin Button of the HEBE League, once again came up with the goods scoring a double, but it was not enough against the inevitable Cyprus striker duo composed of Dimitrios Philippas (hat-trick) and Evangeli Bangura (double). On Sunday, Cyprus FC will be facing the legendary El Santo Subito, who overcame the Sheikhs obstacle in a game that resembled a gladiators' fight. Neck and neck 2-2 at half-time, the Saints came marching in and vanquished the Sheikhs 6-5. Against Spartak Zizou, the Hangovers secured a 5-2 win, with a double goal by Clelia Casalino whose longevity is only surpassed by her passion. But the star of the day in division 1 was definitely Momo Zubiria, whose double double leapfrogged AS Soreta to the top of the table with a 7-1 win over Los Chorizos Bionicos. As for Treehuggers and Survival of the Fattest, they disappointly gave forfeit points away to Spider FC and Knackers respectively. On Sunday, Treehuggers will be facing the Hangovers to try and get back into the race, while Survival of the Fattest will come up against Spartak Zizou.

In Division 2, the star of the day was Berta Cava Cami for Atletico Belgique whose triple double led the way for a decisive 10-3 win over the SkyWalkers. Atletico will be looking to keep that lead when facing B United on Sunday, who lost their first game to Einsteinians 8-3, suffering the blows from another League veteran Florian Bergmüller (with the hat-trick) and two doubles by Marta Gutierrez Benet and Davide Carrino. Einsteinians will have a first test against Serdica on Sunday, who got the better of Orcs in Black with a tight win 3-2. The Legislators, just like the European decision-making process, did not show signs of slowing down during lockdown, and came back to the pitch with hammering intentions against The Running Dead, with a victorious double by Federica Bruno and a 4-3 win. It is worth mentioning that Erik Pentimalli in person scored a goal, proving that self-isolation can have positive effects. On Sunday, the Legislators will be facing Red Star Brussels who came out on top of another tight game against Zlote Ptaki. Leading 1-0 at half-time, the Red Star were guided by Mathieu Germain’s star with the double to secure a 3-2 win. Finally, in the last game of the day, Sofobeast United and FC Fig Puckers drew 1-1.

In Division 3, Arena BXL blasted Cercle Curie KSV 13-5, with four doubles by Ana Ribeiro, Aurélie Balsamo, Michael Pecorella and Pietro Lama. Despite a double double by Anita Sek, the Curie Cirle was squared. Arena takes a strong lead and will be keen to confirm against AC Oronzo Canà, who forfeited their first game against Expected Toulouse. The inaugural game of the HEBE League opposed The Eagles to Sublime Porte and despite Ismail Bayrampasali NOT scoring, Sublime Porte got the 3 points with a 5-3 win, largely thanks to a double by Teslime Karahisarli. The Eagles’ Pit Klein went back to his scoring ways with a double, which is promising for the rest of the season. The Eagles will face PARANOIKA next, who benefitted from the forfeit of Casa del Mal. HueHue FC plucked the Hairy Canaries with a 6-3 win, leaving them high and dry despite a double by Kelsey Perlman. Nathalie Meyer and José Romario Fernandes de Melo weighed in strongly for HueHue FC, each with a double. Los Patos Hermanos conceded the draw 1-1 against Turx & Plux, having led 1-0 at half-time. No less than 7 yellow cards and 1 red card were handed out during a disputed game, which was more prolific in bookings than in goals.

In Division 4, the HEBE League welcomes two new teams: FC Deliciosa and PSG Club Belgique. FC Deliciosa replaced ICF at the very last minute and claimed their first 3 points, sadly on a forfeit of Soloni FC. Hopefully, they will get to play their first real game against PSG Club Belgique on Sunday, a promising game between two new teams. Especially as PSG Club Belgique also clinched 3 points for their first game against the Benchwarmers. Leading 3-1 at half-time, they hung on to their lead to claim a 5-3 win, thanks to two doubles by François Campos and Florian Vancauwemberg. For Benchwarmers, Macarena Ruiz San Jose got her first double of the season. The Schaerbeek Bombers, other new team who is yet to complete a full season in the League, claimed a convincing first win against Binboga 5-1. Same for Futsal Croatia BXL, who beat Brussels Spouts 4-1. La Vie Est Belge were up against La Famiglia and thanks to two doubles by Susana Magano and Bence Horvath, they claimed a 5-2 win. A boost of confidence before opposing the Schaerbeek Bombers on Sunday. For La Famiglia, it’s back to the drawing board with a game against RMP FC on Sunday, who will be kicking off their HEBE League 25 campaign.